See Photos Of Our Other Cakes Too !!
Just click on any small photo to view a larger photo of the same cake and read a description of the cake. 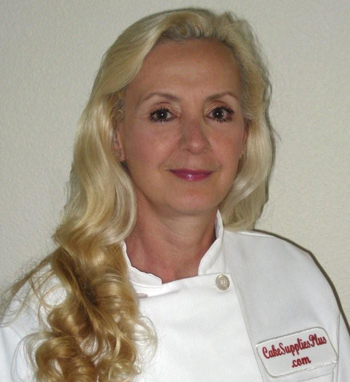 Marsha Winbeckler began her cake decorating career in 1980 with the desire to do her children's birthday cakes. She discovered an immediate knack and love for the art.

Within a year, Marsha was requested to begin teaching decorating classes. A short while later, Marsha also began coordinating a large and active teaching staff in Houston, Texas, for an international cake and candy products firm.

Marsha has planned and coordinated several cake shows, including being a co-coordinator for two large state shows in Texas. She also enjoys participating in shows as a judge and demonstrator.

Marsha's career and personal life came together when she met her soon-to-be-husband Roland Winbeckler  at an ICES convention (international cake decorator's convention). She then moved from Houston, Texas, to Kent, Washington, where Roland resided at the time. In 2003, Marsha and Roland moved to Redding, California.

Roland and Marsha own and manage CakeSuppliesPlus.com--A-J Winbeckler Enterprises, through which they teach classes, produce and sell books and DVDs, and sell decorating products online. Cake decorating has taken them across the U.S. and to Australia, Jamaica, and Canada.

Marsha edited Winbeckler's Cake and Candy Chronicle, an international cake decorating newsletter (back issues available on our web site), for 17 years and the International Cake Exploration Societe (ICES) Newsletter for over 13 years. Marsha was on the 2011-2012 Editorial Board for American Cake Decorating Magazine and is a contest judge for Cakes We Bake, an online Cake Decorating Community.

Appearances on TV, including the Food Network's Sesame Street Cakes and TLC's Ultimate Cake Off,  and demonstrating at international cake decorator's conventions (ICES) are among highlights in Marsha's career. Marsha has also taught at the famed Wilton Cake Decorating School in Chicago and is a Craftsy.com instructor of her online class Fondant Ruffles, Pleats & Drapes.

She is the author of three books, Cocoa and Chocolate Painting, Wafer Paper Uses, and Decorating With Rolled Buttercream Icing, plus a candy DVD, Easy Chocolate Tempering and Candy Coating Uses.

Other interests of Marsha's include computer technology and, when time permits, Marsha and Roland enjoy riding their Harley-Davidson motorcycles around beautiful Northern California.